Posted on February 1, 2018 by pamwhittle

The Caley has launched an exciting new integrated website and blog at www.thecaley.org.uk

The new website will have all our new blog posts going forward and we have transferred the history too – with a great search facility so you can easily find what you are looking for.

The new site went live on the 1st February and we are working hard to sort any slight glitches.  In time this old site will disappear.  Thank you all for your support.

Another day, another bonfire!

Another week and the pleasure of another bonfire! The new raspberry canes were planted. The variety is ‘Glen Ample’. Raspberries are hungry plants, so the planting holes had plenty of compost added.

A ‘splint’ was put on the broken fence post and as the hole was dug, it was clear to see that the post had been sitting in water and that was the reason it had rotted. The Caley plot seems to sit on a spring line since you can find water all over the plot if you dig down deep enough.

One of the green plastic compost bins was emptied. The compost had become quite compacted, so it was forked through to aerate it and put back to finish rotting down. The other two bins will also benefit from being done.

The hazels were pruned back and the ground beneath given a weeding. The hazel prunings will be used to weave into the windbreaks.

The strawberry plants are showing signs of growth so the job of cutting away the old dead leaves was started.

George is getting ready for spring

The Greenhouse has been made ready. 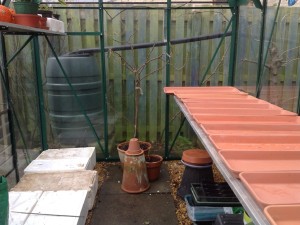 The bulb foliage is well through the top of the plunge so I have made the decision to lift them out. This is much about the same as last year when I started proceedings round about Burns Night.

The pots are cleaned off, removing all the plunge material and scraping off just enough compost from the tops of the pots to allow a space for watering later.
At this stage I will leave the pots unwatered and let them dry out so that I can control the watering and therefore their growth. 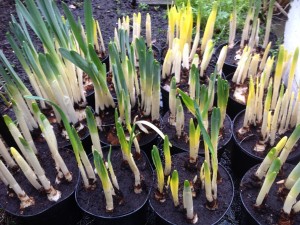 I lifted some of my own bulbs from the allotment this year hoping that they would perform well but sad to say they appear to be a bit uneven at this stage. However I also have bulbs from Scamp, Walkers and Parkers as a safety net.
Fingers crossed.

Footnote from Pam: I can see no foliage on my pots at home.  But am not worried – yet!

Back on the Allotment!

There was still some snow on the ground as we met up for the first working day of 2018, but the soil was not frozen, the sun was shining, and it was good to be out doing some physical work.

And we had the first bonfire to welcome in the New Year!

It is too early to think of sowing and planting but plenty to be done on the plot. The willow grown as a western windbreak was cut back to the trunk, not a good look but it soon grows in again and the prunings are used to weave into the other windbreaks round the north edge of the plot.

The buds on some of the fruit are beginning to fatten so time to start on boosting the soil fertility by giving each a forkful of well-rotted manure round the roots, being careful to keep it away from the bark of the stems. The first leaves are showing on one of the rhubarb plants – strangely the late season one – and these also were given a manure mulch.

The netting over the winter brassicas was checked over and dead or dying leaves removed. The chard has not survived the severe frosts, so it was dug up and put in the compost bins. Cabbage root fly has been problem this year –  the worst it has been for us. Most of the cabbages died off, a couple managed to grow into small ones and only two became a decent size. The brassicas will be rotated round and will be grown on a different bed next year and we shall use cabbage collars to try and minimise the problem.

All most welcome but as numbers are limited it is advisable to book a space using the email: rchsallotment@gmail.com

Not long ago nobody talked about winter bedding. Plants like wallflower were planted in  the autumn  along with bulbs to flower in spring.  Milder winters have encouraged garden centres  to sell plants such as pansies in flower as suitable for winter.  But however good they look under cover once out of doors – hard spells can knock them back, 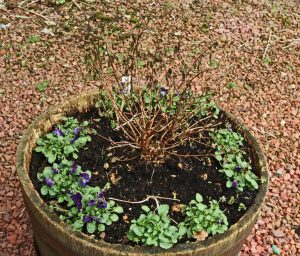 though they do bounce back into bloom as spring approaches.  To speed this up dead head the damaged flowers.

The hard frost most of Scotland had just before and after Christmas will have tested  ‘hardy’  fuchsias and other  borderline perennials. However sad they look leave them until spring then cut back to where new growth emerges.

New shed for the Allotment

The shed fairies paid a visit to the allotment last week and left behind a very nice tool shed for us.  The fairies in question (Richard & Pam Whittle), did an excellent job on the shed, ensuring that it was level and secure, with the back posts going into the ground around 24″ deep. 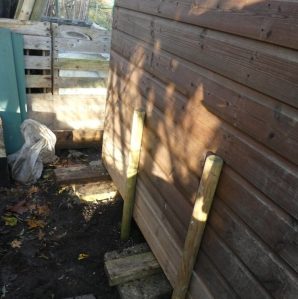 It took a bit of effort to make sure the base was level (slabs and sleepers were involved) but it was worth all of the hard work to have such lovely tool storage. 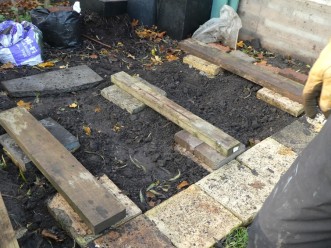 Many thanks to the shed fairies – your efforts are much appreciated.

Another very cold but brilliant day, though a cloud hung over the allotment for most of the morning.

The frosts of the past few days have not caused any damage to the winter crops although the field beans grown as a green manure had wilted but by lunchtime the plants were perky once more. 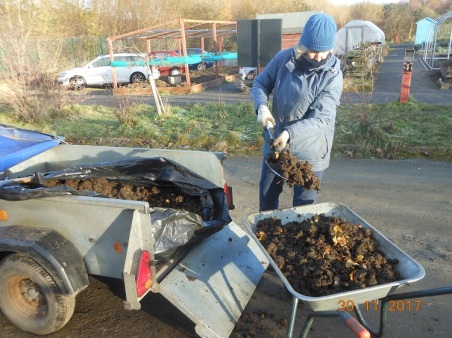 We kept warm by barrowing a new delivery of manure over to the bin area and hammering in posts for the new raspberries.

One of the two plum trees on the plot – a gage called Denniston’s Superb – has rarely fruited and has had little blossom. It is well named since the occasional gage we have had from it tastes quite superb.

It was planted in 2007 but the site is obviously too cold and exposed for it so we are calling time on it and dug it up today. Once it was out of the ground we could see the roots had not developed well and the soil was poor and stony, as was the whole plot at the beginning so it has had a hard life.

We shall replace it with a damson which is hardy and should do better.

There is a large heap of soil in the car park but with a lot of couch grass and plastic rubbish in it but good once it has been riddled so that is warming work too and helps fill the raised beds.

Sex and the single Gaultheria

Small bushes of Gaultheria (was Pernettya) mucronata are now in garden centres for use in winter planting schemes. They often prove to be disappointing purchases as they produce few berries in later years and also grow quite a bit taller. Most on sale are female plants and you need to get a male to get pollination in future. These are hard to come by as they don’t look so attractive so don’t sell well. The taller plant in the photo is a male and will be needed to pollinate the two red ones which will soon get taller. The small white plant ‘Pearls’ is one of a few that are self-fertile; it also stays quite small. These are easy plants to grow provided they have acid conditions and don’t dry out. They originate from the south of South America where they are known as prickly heath. 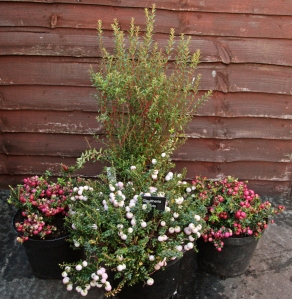 Lunch in the sunshine.

Last week we started on repairing the raised beds and weeding along the north edge of the plot and we carried on with that today. Fortunately, the dark rain clouds disappeared, and we had our lunch in brilliant sunshine.

The radiccio has been frosted so the remaining plants were taken out. The brokali has stopped producing so it was removed too. It has cropping has been good, but it does need very regular picking over since the stems quickly go to flower.