Working on the allotment as June comes to the end.

A dull start and then the rain came on but not heavy enough to stop things happening on the allotment. The work now  is mainly weeding and watering and some succession sowing plus filling in the gaps where there has been poor germination.  The broccoli plants for next spring are growing well and were staked and we shall soon need to do the same for the kale and brussel sprouts.

Last week the sawfly appeared for the first time this year so were given a spray with Bugclear which is acceptable for use organically. We fortunately have very few pests and disease but this is one where we do use a spray since removing the caterpillars by hand is too time-consuming.  If we don’t take action, the sawfly will eat its way through all the leaves of the bushes on the gooseberries and the redcurrants.

The carrots in the tubs have shown almost no germination so we did a re-sowing of Chantenay Red Cored 3.  Hopefully we should still get carrots for the September shows.  We had a germination problem too with the succession sowing of peas so we had another go at that.

The Japanese vegetables which were planted out two weeks ago have settled in but not showing much growth.  We did a succession sowing of  Komatsuna and put back the covering of fleece.

The late spring has not affected the amount of fruit showing.  We have good crops of plums, apples, gooseberries redcurrants and blackcurrants. The plums and apples will need to be thinned so we shall have a smaller crop but the fruit will be a better size.

To get really big lucious plums, they should be thinned to two/three inches apart but it is difficult to bring yourself to reduce the crop so much. The first strawberry was ready today and the others are almost there too.

The shallots are ready for thinning down to three bulbs per plant so we get reasonably sized shallots for cooking and showing. The autumn planted onion sets are of a good size for pulling and that will create some space for planting out the leeks.

Pallets –  we have started cropping the salads. Both pallets showing good growth on the lettuces, radishes and mizuna and little to show between them. 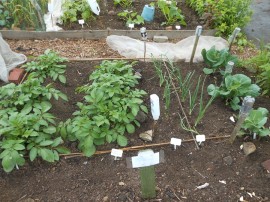 This entry was posted in Allotment, Biochar trial. Bookmark the permalink.