Best crops of carrots ever

A mild and sunny day on the allotment as the team worked tidying up the veg beds for autumn. They Caley allotment did well at the Dalkeith Show getting prizes for the marrows and beetroot.

The comfrey has been given its last cut of the year and the main crop potatoes dug up, so now we are taking advantage of the days before the first frost to enjoy the last of the summer crops of courgettes and runner beans.

The warm summer has given the best crop of carrots ever, including some giant ones – 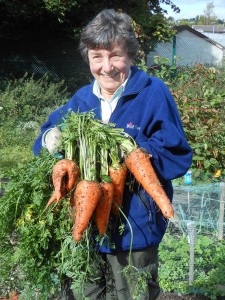 good for soup. Tayberries and autumn raspberries are still being picked and with the winter veg being so far on, there was even a small picking of Tuscan kale and Brussel sprouts. The leeks were late in planting but are thickening up nicely. The last veg to be planted this season will be the Japanese onions which will go in shortly and grow on throughout the winter months, giving a crop before the spring sown ones.

The Japanese veg are still growing and the bean pods have appeared on the edaname though it will be touch and go if they develop fully before the cold weather starts.

Jobs for next week: Finish weeding the veg beds;Turn the compost heap; Dig up the old rhubarb plant and asparagus.

2 Responses to Best crops of carrots ever