First job on allotment today was to get the hose out and give the autumn raspberries a good soaking followed by the winter brassicas and the courgettes.

Potatoes larger than your hand 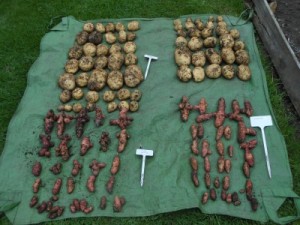 Potatoes on the left are the ones in Biochar trial

The potatoes in the trial were dug up today. We had planted 2 tubers variety Sante and 1 tuber variety Pink Fir Apple. The whole of the bed had compost added in the spring but there had been no watering.

So a significant difference with   Sante and some of the tubers were very large, the heaviest weighing in at 1lb 12oz but Sante is certainly a heavy cropper.

Overall both beds gave pretty good results for cabbages and potatoes and showed that you can get these results without watering but adding Biochar to the ground or watering would increase the yield if you wish it.

We dug up the remainder of the potatoes, and sowed a green manure on the Biochar trial bed. The dwarf French beans are over so they were cut off at the ground, leaving the roots with the nitrogen nodules in the soil.

The succession sowing of peas, variety Hurst Greenshaft, had few pods but were good strong plants. A little investigation showed we had competition for them, there was a pile of empty pods lying amongst the plants so the mice were obviously there before us. It was not worthwhile trying to save what was left so they were cut down too. Next week we shall sow more green manures on the remaining empty beds.

See you next week

This entry was posted in Allotment, Biochar trial. Bookmark the permalink.