Moving on to winter veg….

Posted on November 1, 2014 by pamwhittle

The runner beans have now been cleared so that is the end of the summer crops. Took down the netting over the fruit cage on Thursday

and cleared the last of the autumn raspberries. We are now eating winter veg from the plot such as kale and cabbage as well as the stored potatoes and onions. The brussel sprouts will be ready at the end of the year and we shall start on the leeks and digging up the artichokes in January. 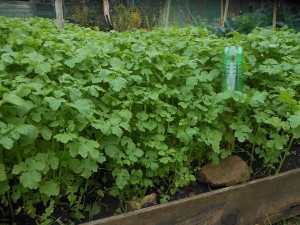 The hut and the storage pen were cleared and tidied today. After the strong winds of earlier in the week the staking on the tall brassicas needed checked and extra support added. Weeding still going on of course.

The longer term winter project is to improve the crop from the trained soft fruit along the north edge of the plot. These plants were put in when we first started onsite; the soil is poor, they are fully exposed to the north and east winds and on a slope so watering is difficult.

The plan is to move the plants further into the plot and build a shelter along the north edge. The plants are well established so we are going to propagate from them using layering and tip rooting. There are also some young plants already propagated by nature which can be lifted and replanted.
The plan for a shelter is to build a dead hedge. We did have plastic windbreak along this edge but it was repeatedly blown down. A dead hedge will filter the wind more and have the advantage of using the willow and hazel prunings from the site as well as old stems such as from brussel sprouts and old canes from the fruit. It will also provide a haven for the wildlife – hopefully not the rabbits, slugs and snails.
Jobs for next week: Prune back the willows and hazel – bring loppers and saw; Put in the new stakes for the loganberry; Put in support stakes for the dead hedge; Clean and sharpen the tools

See you on Thursday