Spring bulbs on display at SRGC Show in Kincardine

Images of spring bulbs most from the Scottish Rock Garden Club show at Kincardine on 21st March. As 2015 is proving to be a relatively late season quite a few crocuses, reticulate iris and even snowdrops were on the benches. Although these show plants are in pots virtually all will grow outside. 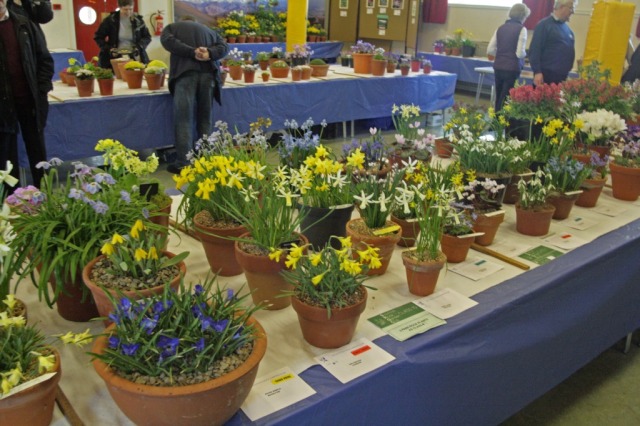 The blue flowers in this first photo are on a Tecophilaea the Chilean ‘blue crocus ‘ which is not recommended for the open ground.

The image below shows a range of miniature daffodils, mostly wild species. 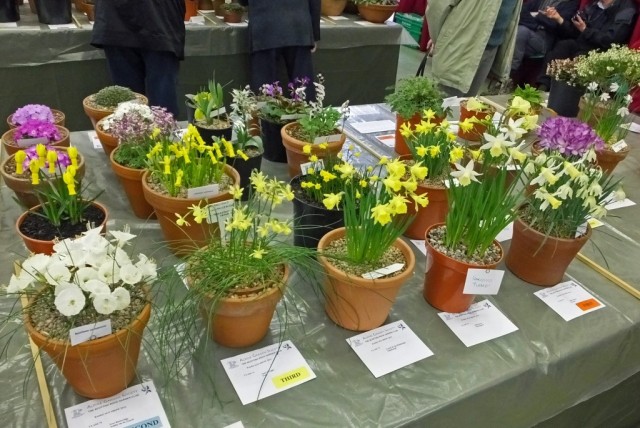 The striking white hoop petticoat type on the left is Narcissus cantabricus. Several forms of the wild trumpet daffodil N. pseudonarcissus are at the front, noticeably smaller than modern garden cultivars . At the back are two examples of N. cyclamineus with distinctive sweptback petals.

One of the most graceful garden forms derived from cyclamineus is Mitzy which starts very pale yellow then fades to white.

It is similar to but a little bigger than Snipe. N Betty Mae was raised in New Zealand though its exact parentage seems to be unknown. 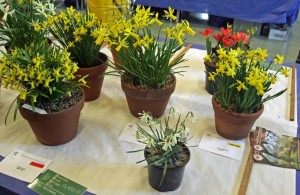 Though very common Tete a Tete is a useful little daffodil.  The little white flower is Tinkerbell,  a hybrid which has signs of the drooping white N. alpestris in it. 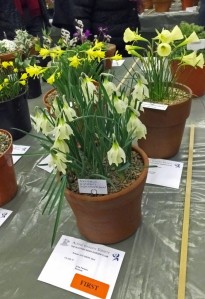 See the close up of alpestris for comparison. This rare plant is similar to N. moschatus which is easier to obtain.

The RBGE often mount a display at SRGC shows and the following images are two examples of daffodils from their collection. The yellow N. bulbocodium is well known but makes an excellent pot. Less familiar is the little white N x munozii garmendiae

which is thought be a natural hybrid between N. triandrus (Angel’s tear daffodil ) and N. cantabricus. Wild daffodils are notoriously promiscuous.

includes other taller daffodils mostly jonquils. You can see more photos as well as information on the SRGC website.

This entry was posted in Bulb growing, Non Caley Events. Bookmark the permalink.