Not long to go now before we open our Edinburgh garden on Sunday 19th April, 2-5pm. A lot of extra work goes in to these openings and the garden benefits. I become rather painfully aware of all the nettles that haven’t been grasped, which areas really need a major overhaul, and where the gaps are. But the garden looks crisp and tidy. The edges have been recut showing the geometry of this garden where curves predominate. What will be on display is in the hands of the weather, but the rhododendrons particularly, are far later than last year. The tulips and even some of the daffodils are behind too.

These photos were taken on 2nd April after a morning frost. 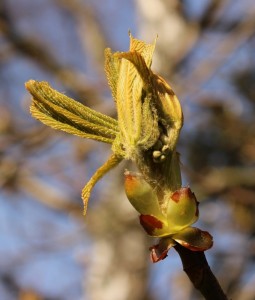 already visible on the OS map of 1932, is on its way. It is such an important feature of the garden that I dread the spread of the disease which is doing such damage to these trees.

The ferns too are unfurling. 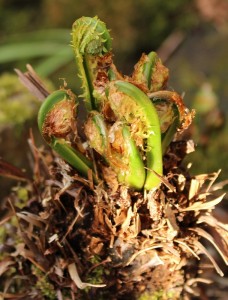 This cloud pruned conifer (Chamaecyparis boulevard I think) has to be trimmed before the opening and here it is half done, showing both precision and shagginess. 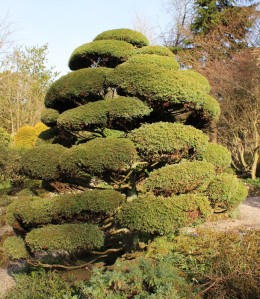 I know it doesn’t look like any pictures of proper Japanese pruning, but it provides a nice touch of asymmetry and a much less dense shape than if it was a solid conifer. 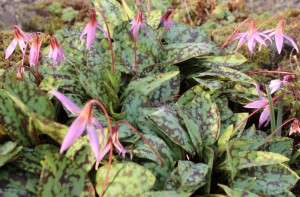 Erythroniums do well here and dens-canis, the dog’s tooth violet, forms large clumps and goes where it chooses around the garden. It does not last very long in flower but the beautifully marked leaves prolong the pleasure of it. 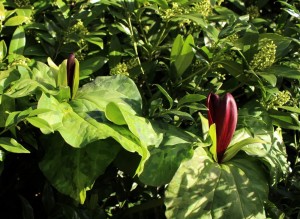 I had forgotten about this very tall Trillium but it cleverly found its way through Sarcococca and Skimmia Kew Green.

Details about the opening (also open on 17th May) from the Scotland’s Gardens Yellow Book or the website, www.scotlandsgardens.org.

This entry was posted in Redcroft Garden Blog. Bookmark the permalink.