A dry sunny day on the allotment

A dry and generally sunny day and not too warm for those working hard on turning the compost heap into the empty bay. It has rotted down well and there is a good amount waiting to be spread on the beds later in the year.

The leaves of the onions, varieties “Sturon” and “Snowball”, are beginning to fall over, a sign they are ready for lifting, so the bulbs were slightly eased out of the soil to speed up the ripening and will be lifted and hung up to dry next week. As the beds are cleared of this years’ crops, they are being sown with green manure to improve the soil condition and add fertility. It also keeps the weeds down. 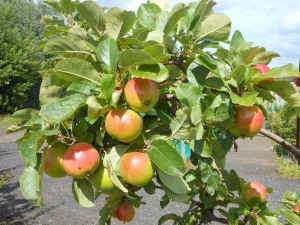 Training in of the step over apples

The stepover apples have put on good growth this year so extra stakes and horizontal canes were added for tying in the new growth.

We cut down the shaws of the next two rows of potatoes, varieties “Charlotte” and “Nicola” and will leave the tubers in the ground for two weeks to let the skins harden before digging them up. The potatoes in the tubs, variety “Winston”, which are being grown for show had their shaws cut down too and will also stay in the tubs for a couple of weeks. They will need very careful handling when we take them out so as not to damage the skins.

We had a small picking from the autumn raspberry, much earlier than normal and for the first time there is fruit on the boysenberry, a dark red berry, a cross between a raspberry and bramble. No sign of fruit on our saskatoon though there was on the plant at the Beechgrove in tonight’s programme.

We decided today the leeks are all going to seed but we are going to leave them to do this for the spectacle. The ground is not needed for anything else. 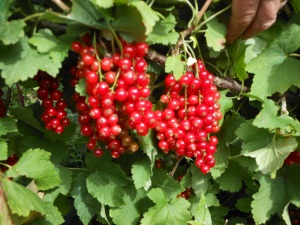 Redcurrants hanging from the bush ready for harvest

Jobs for next week
Dig up onions and hang up to dry;
Clear ground at the back of the willow fence;
Weed around the redcurrants;
Weed around the brassicas next to compost heap;
Strong stakes for the cordon gooseberries;
Cut off the old strawberry leaves when fruiting finished and clear the old plants from raised bed;
Sow green manure as beds as cleared

This entry was posted in Allotment, Beechgrove Gardens, Biochar trial. Bookmark the permalink.