The work on the allotment bears fruit….

The spell of delightfully warm and sunny days continued allowing the last of the crops time to ripen and make up for the slow growth earlier in the year.

The apples are ripening fast and most of the cookers
are now off the trees, and still getting a good crop off the autumn raspberries. The first of the sweetcorn was picked today – a veg just like peas and carrots that tastes so different when eaten fresh – and quite a few more to come.

Looking ahead, we planted out some spring cabbages 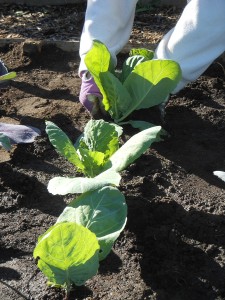 and the autumn onions will be put in when the weather is colder – the warmth just now will probably cause them to bolt. The garlic won’t go in until November.

The fruiting on the loganberry and bramble is finished so this year’s canes were cut down to the ground and the new canes tied in to the wires.

The strawberry runners have rooted well where they found themselves but time to separate them and pot them up and we even remembered to label the different varieties before cutting them off.

The winter brassicas are thriving and the Brussel sprouts are ready for a picking but they are better tasting once they have been frosted so we shall leave them for a little while yet.

Jobs for next week: Weed round the hazels; Clear out the canes/wire area; Root the shoots from the apple rootstock for grafting; Repairs to raised beds.

This entry was posted in Allotment and tagged allotments, spring cabbage, sweetcorn. Bookmark the permalink.

1 Response to The work on the allotment bears fruit….