Abundance at the allotment.

The rain and heat of the last few days has made a big difference to the plot with good growth on the sweetcorn, and the runner beans and French climbing beans finally getting going.

The courgettes and the brassicas were mulched with compost and leaf mould to give them a feed and keep the moisture in. Each year there is a problem with the courgettes getting mildew early on, generally not helped by them only being watered once a week so we shall see if the mulching makes a difference. The brassicas are growing in the new raised beds. The soil in these will improve as we work it but the compost mulch will give a boost to the growth this year. 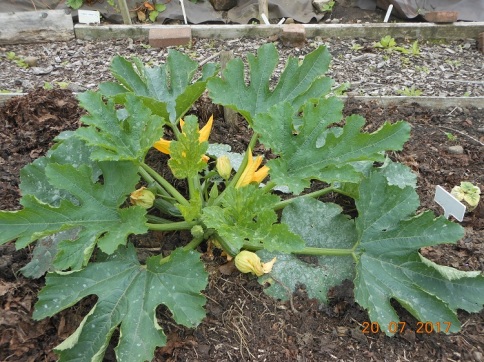 The strawberries had a good haircut today, all the old leaves were cut off to allow the new leaves room to grow and will be given a feed.

The rest of the soft fruit was given a feed of fish, blood and bone and watered.

The gooseberries are ready – all were picked, so there will be gooseberry jam at the Open Day!

The grass had another cut and work was started on trimming back the edges – a long job but means the mower can cut them and it is then a quick job with the shears.

And, of course, the weeding: the beds are weed free so now we are working on the edges of the plot and the paths.